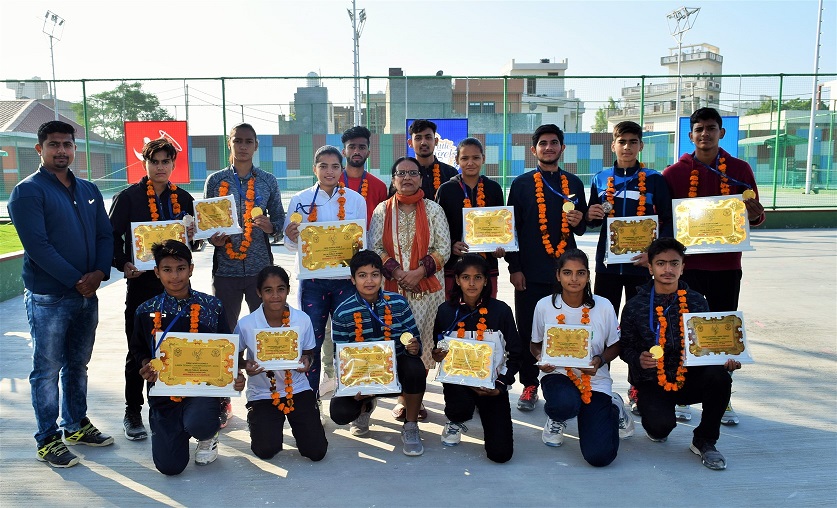 Little Angels prodigies seized hold of the CBSE National Lawn Tennis Championship for the Ninth time and proved their mettle. The Championship was held in Yamunanagar from 3rd November, 2019 to 13th November, 2019. In the Finals, our players got victory over the team of Gyan Ganga School in the Tie Break with 7-5 score in U-19 Boys category. In the category of U-17 Boys, the Angelians won over the team from Bangladesh by 6-0 score. In the category of U-19 Girls, we got victory over the team from Bhubaneshwar by 6-3 score. In the Singles, the players of Little Angels clinched overall trophy by securing 4 Gold & 5 Silver medals. Aman Dahiya won against Aryan from Bangalore by 6-0 score in U-17 category. In the same category, Rajeshwari was beaten by 6-2 score. Since 2010, the Little Angels geniuses have won the CBSE National Championship by their perseverance, will power, tenacity and the facilities provided by the School. Karan Parashar, Aman Dahiya, Aditya Rathee, Arnav Narang, Sharad, Utkarsh, Udit Gogai, Lakshay Gupta, Rene Singh, Anjali Rathi, Khushi Kharab, Muskan, Muskan Dahiya, Sameeksha Dabas and Rupal showed their excellence by playing competitively. About 50 teams participated from India & abroad including the players from Dubai, Katar, Doha & Sharjahan.